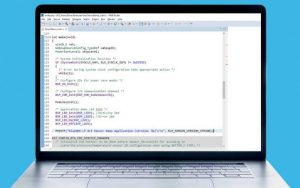 “Featuring a user-friendly and customisable development environment with ready-to-build examples, the new IDE helps both expert and inexperienced users jump-start their projects,” according to the company. “Using WiSE Studio to learn, explore, and build applications and prototypes, developers can take advantage of the Bluetooth LE 5.2 features available in devices such BlueNRG-LP.”

Under the hood is open-source C/C++ development environment Eclipse. The graphical user workspace uses the GNU Arm Toolchain with GCC compiler and GDB/OpenOCD programmer and debugger. Eclipse plug-in software can be found on-line or installed directly from within the WiSE Studio environment.

It supports the integration of BlueNRG SDK packages and includes drivers, libraries and sample code to build IoT nodes – the SDK can also be downloaded, both SDK and IDE are royalty-free.

For multiple sensors, different network topologies can be chosen: either gateway-centred using BlueNRG-LP’s multiple concurrent connection capabilities, or scalable across any distance and number of nodes with ‘BlueNRG-Mesh’.

The IDE has been created with designers of smart-building, home-automation and location services in mind, according to ST. Examples include: asset tracking, industrial sensor networks, wearables and gaming.

The WiSE product page is here