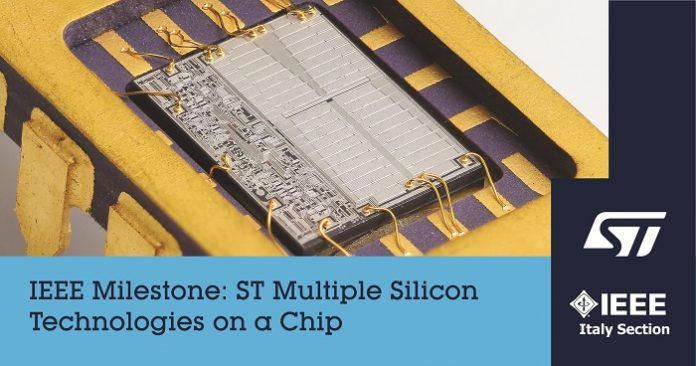 STMicroelectronics (NYSE: STM), a global Semiconductor leader serving customers across the spectrum of electronics applications, today announced that the Institute of Electrical and Electronics Engineering (IEEE) presented the Company with an IEEE Milestone for its groundbreaking work in the super-integrated silicon-gate semiconductor process technology combining the high-precision analog transistors from a Bipolar process, with the high-performance digital switching transistors from a CMOS process, and with the high-power DMOS (BCD) transistors onto a single chip for complex, power-demanding applications. Over the years, the BCD process technology has enabled revolutionary developments in such end applications as hard disk drives, printers, and the full range of automotive applications, among many others.

During a live/virtual ceremony held at ST’s plant in Agrate Brianza, Giambattista Gruosso,  IEEE Italy Section Humanitarian Activities Committee Coordinator and past Secretary, and Jean-Marc Chery, President, and CEO of STMicroelectronics, unveiled the IEEE Milestone plaque. The plaque will be mounted in two ST locations around Milan, Italy, where the development work on the Multiple Silicon-Gate Multipower BCD work was performed: at the main entrances to two ST sites: Agrate (located in Agrate Brianza, Italy) and Castelletto (Cornaredo, Milan, Italy). The inscription on the plaques reads:

IEEE established the Milestones Program in 1983 to recognize the technological innovation and excellence for the benefit of humanity found in unique products, services, seminal papers, and patents. Each milestone recognizes a significant technical achievement that occurred at least twenty-five years ago in an area of technology represented in IEEE and having at least regional impact. Currently, about 220 IEEE Milestones have been approved and dedicated around the world.

In the early 1980s, ST engineers began work to reliably address a broad range of electronic applications by pioneering the ability to integrate heterogeneous transistors and diodes on a single die. Focused on customer needs across multiple market segments, the engineers’ objective was to deliver electric power in the range of hundreds of Watts under the control of digital logic that could scale with Moore law. The target devices would also support precise analog functions and minimize power consumption to eliminate heat-sinks

Since launching the BCD process, ST has sold 40 billion devices using ST Silicon-Gate Multipower BCD and is soon to begin production of the 10th generation of the technology. The technology used in front- and back-end manufacturing sites in Europe and Asia is ubiquitous in the market and can be found across a range of automotive subsystems, in smartphones, home appliances, audio amplifiers, hard disks, power supplies, printers, pico-projectors, lighting, medical equipment, motors, modems, displays, and more.

“Blending together the high-precision capabilities of Bipolar transistors with the digital control of CMOS, and the high-power benefits of DMOS in the early 80s was an exceptional achievement. It could only have been done by an incredibly talented technical team operating within an organization that had the vision and foresight to recognize the value of smart power, which was then a completely unique concept,” said Jean-Marc Chery, President, and CEO, STMicroelectronics. “Now, we are 35 years, 9 technical generations, 5 million wafers, and 40 billion chips sold later – almost 3 billion delivered last year. We proudly welcome this IEEE Milestone plaque, which recognizes ST’s BCD invention among the select group of technologies that have advanced mankind.”