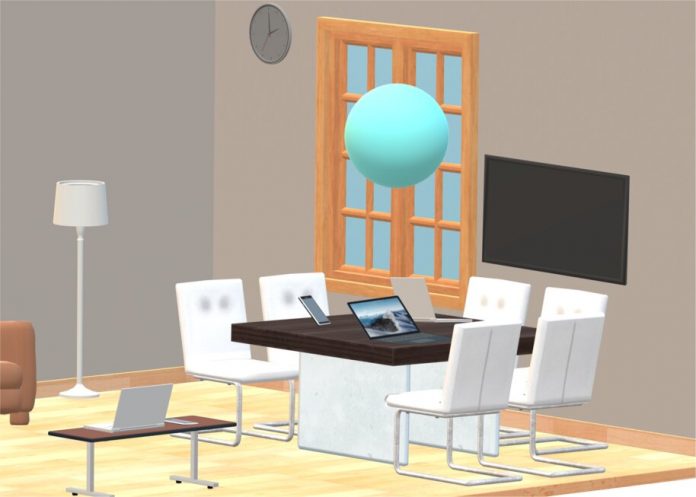 Mobile phones and tablets devices have allowed us to stay in touch regardless of our location, yet they still rely on plugs, sockets, and charging pads to power up. New technology developed at Aalto University may be the key to true wireless charging for these and other electronics in years to come. The research team includes researches Dr. Prasad Jayathurathnage and Dr. Xiaojie Dang, and professors Sergei Tretyakov and Constantin Simovski.

While researchers around the globe are working on free-position wireless charging—which would unchain devices from set charging points—the most common solutions involve complex control and detection functions. A transmitter traditionally has to first detect a device presence and position to be able to send energy in its direction, usually done with cameras or sensors, adding bulk and cost to the device.

The new transmitter bypasses this need by creating power transfer channels in all directions, automatically tuning channels when receiving devices are in motion. Devices like phones, laptops, and other small appliance equipped with a new receiver can simultaneously receive energy to charge batteries or directly power their functions—without ever being in physical contact or being brought to a specific place.

“What sets this transmitter apart is that it’s self-tuning, which means you don’t need complex electronics to connect with receivers embedded in devices. Since it self-tunes, you can also move the device freely within a wide charging range,” explains Prasad Jayathurathnage, a post-doctoral researcher at Aalto University.

The team has achieved the effect through the design of the coils used in the transmitter. By winding the coils in a specific way, they create two kinds of electromagnetic fields: one going outwards and the other around. These fields couple the receiver and transmitter to achieve efficient power transfer.

Currently, the transmitter is highly efficient at 90 percent at up to 20 centimeters distance, but continues to work at longer distances, just with a lower efficiency of energy transfer. In principle, the peak-efficiency range could grow as the technology is refined.

“For now, the maximum range at peak efficiency is dependent on the size of the transmitter and receiver. With the right engineering, we could shrink them down,” Jayathurathnage says.

While the team has demonstrated proof of concept, safety tests are still needed to confirm that the electromagnetic field generated by the transmitter is not harmful to humans. It is, however, clear that the resulting electric field, which is known to be the main cause for potentially harmful effects, is minimal as the technology relies on magnetic fields.

Once deemed safe, bringing the technology to product would mean a little less hassle in a world increasingly dependent on smart devices.

“True wireless charging means more personal freedom. You won’t have to worry about where you put your phone or whether you remembered to plug it in,” says Jayathurathnage.

The research team has already applied for a patent for the transmitter. The same group is also developing wireless charging possibilities for industrial applications through the Parkzia project, which turns any waiting point for robots like e-movers into a charging spot.