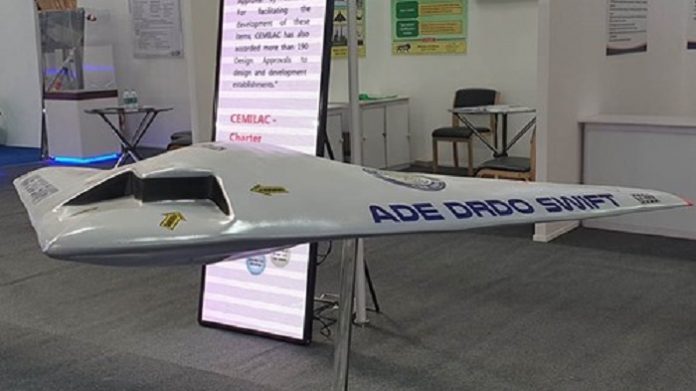 SWiFT, 1-ton All Up Weight (AUW) Technological Demonstrator for India’s upcoming Unmanned Stealth Bomber has begun its ground level trials on the first assembled Prototype, that will been involved in series of low, medium, and high-speed taxi testing to ascertain aircraft’s performance and instrumentation from a ground control station to verify the functionality while the vehicle reached accelerated speeds.

If ground test data collected are in the required parameters based on the final test verifications then preparation for the flight testing might be carried out in the next few weeks as per information provided to idrw.org. SWiFT will be powered by a Russian NPO Saturn 36MT turbofan engine, that will be later replaced by GTRE’s Small Turbo Fan Engine (STFE).

India’s Defence Research and Development Organisation (DRDO) had delivered retractable landing gear (RLG) systems for the SWiFT program developed by Combat Vehicles Research and Development Establishment (CVRDE) earlier this year. SWiFT will be used to collect data on the controllability of flying wing configuration and autonomous take-off and landing technology, retractable landing gear system, flying-wing design, and low radar signature data of the aircraft that will be used for further improvements.

India’s Ghatak stealth flying wing combat drone powered by a Dry Kaveri engine generating 46kN of thrust will be ready for flight trials by 2024-25, once most of the technologies are validated on the Scale down SWiFT variant. SWiFT might also go into production as part of the unmanned wingman bomber program separately as per the latest speculations.